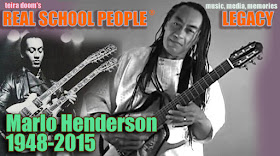 "My music philosophy is simple, “one” is the sum total of one’s experiences and most of what I live is at some point in my life  translated into music I write or play."
Marlo Henderson


At 1:15 in the morning, on Sunday, October 25th Marlo Henderson passed away.There are some people  you wish were blessed with the gift of immortality and Marlo was just that person. Through his 50 years in the music industry, he was prepared for the next 50 years and even further into the future.   How could one of the greatest musicians whose work was at the core of the real school timeline, not have been legitimately acknowledged?

There are so many of us who worked with this producer, songwriter, guitarist, and arranger---did I leave anything out? Of course. His musical fingerprint was on practically everything that any of us listened to back in the day and in the present.

Marlo was an original member of the group Maxayn,with Maxayn Lewis, Andre Lewis, and Emiry Thomas. The group,  was a unique brand of cutting edge funk. They were innovators who paved the landscape for those who followed. And to this day, their recordings and contributions to solid, real groove continue to inspire.

When the group's first self titled album, Maxayn was released in 1971, Marlo and Andre were still with the Buddy Miles Express.


To say that Marlo had 50 years in the music industry as a 360 degree musician is not enough. He wrote music in every musical genre. He should be praised with every accolade possible.

He was a humble, easy going human being. I remember one day we got together on some musical tech stuff. We’re sitting in my studio and he asked about my grand-kids---- it ended up with both of us, pulling up pics from our devices talking about our grand-kids and kids. We knew that the music was important, but that moment was about life.

His son, Palo who is also musician and DJ is continuing the legacy. He shared an interesting trivia about his dad : He was named Leroi Mario Henderson, but the Mario was misspelled on his birth certificate as Marlo.

"It's so surreal. The men I grew up admiring are now hitting me up and telling me how my father inspired them to play guitar. People from all over the world are posting stories of him, and it's pretty rad. His fans have contacted me and it's been really cool. I'm doing my best to get back to everyone who has reached out but, there are so many of you lol!...  I'm overwhelmed but, I owe it to him to make sure his friends, family and fans get updated. Thank you all for what you've done and what you continue to do. Though I feel injured I still weld my sword with extreme force." 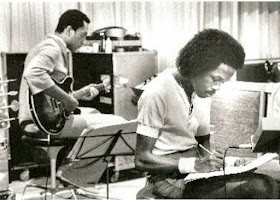 "I wanted to send my deepest condolences this evening to the family, friends, fans and loved ones of the incomparable and late guitarist and composer Marlo Henderson.

He recently made his heavenly transition and we send him love, peace and blessings.
Marlo received a Masters of Fine Arts degree in Music and did amazing work with Earth Wind and Fire in our early days.

We are pictured here together at (The Beatles) George Martin's Air Studios in Montserrat, West Indies working on the FACES LP. An amazing studio George built there after falling in love with the island.

I first met Marlo at a party in the early 70s that my brother Maurice took me to! He was performing with Buddy Miles and Jimi Hendrix!

Marlo has worked with almost every major artist in the industry and has performed on more than 60 gold and platinum albums.

Thank you Marlo for your oustanding myriad contributions!! The arm behind the army and we celebrate his life!!

You are respected and revered by all, and will truly be missed!!
Job well done my friend!!"

Because  of his endless catalog of work there is no way you can truly use “Marlo was”and it's painful to refer to him in the  past tense.  With that said, I am making a compromise in reference to him: Marlo Henderson was, is and always will be at the core of the real school tapestry of music. Top 40 bands back in the day played his signature riffs. He's the authentic "guitar hero".

Wornell Jones, wrote and worked with Marlo and speaks of him as "One of the architects of modern black music." Jones, Maxyn Lewis and Marlo wrote So Much More performed by Ramsey Lewis which went to #5 on the Billboard Jazz charts,


When asked in an interview about why soul and blues continues to have a devoted following, Marlo explained.


For example, “we” , the mainland American slaves, created a different rhythm emphasis of the “2” and the “4” in a four beat bar, this is unique even among other blacks in the world who accentuate the”1” and the “3”. Because of that fact, all modern pop music is a derivative of those “slave beats”. It uses that very “2 and 4” principal foundation rhythmically and the pentatonic scale, which is an original African scale in basic “funky” melodies.  All that to say…it’s an original American musical art form. It will always be so." 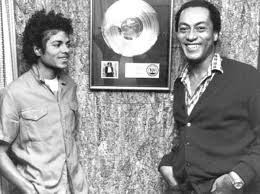 Marlo, is the musician that you've always heard, that your ears befriended. I “knew” Marlo from reading album credits before working with him in the 80s. Little did I know, reading his name on innumerable albums in the east coast home where I grew up, that years later we'd be working together and become friends.

Even for the listener who may not have met some of the most celebrated musicians of our time, there is a subtle familiarity that abounds when one continually sees names credited on some of the most notable music memories immortalized on wax. Especially when more than 50 of this wax went gold and platinum!

I called his world, Marlo-land, because there were so many layers of depth to it. Everything in it was meshed with music, peace and the joy of creativity. He was a polished producer. He fined tuned every element of his production like a sculpture made of rare glass. 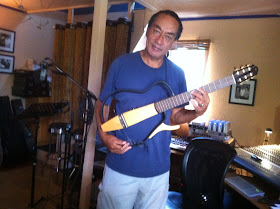 Talking with and working with Marlo, you would never know the extent of his resume. He was never a vocal billboard of what work he had done. He would acknowledge it if you brought it up.

Continually working and innovating was his day to day life. His support to many in the music industry, from the new musician, songwriter/performer to even the veteran in the industry with legacy was monolithic. He warmly embraced innovative musicians, songwriters and performers, sharing a wealth of experience and history with humility and grace. Each day remaining current with the technology that had changed the face of the music industry as he knew it 50 years ago, he used the tools of the new music technology and created his work with enthusiasm.

Once at his studio, he shared this beautifully ethereal song explaining how he produced it as he heard it in his sleep. The song was Reflections. He also shared a CD with me of music he had written for the 12 months of the year that was a work in progress. 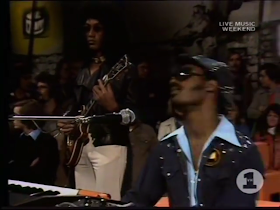 Marlo played with Stevie Wonder's band, Wonderlove back in '74.


Live performances like this are a gem. This performance brings us back to the time when musicians really played music. It was when the concert was the jam. There's no school like the real school.


Marlo gave some of the most eloquent and easy going interviews. He truly had a comfort zone when talking about his history and career in the music industry.


What is most significant and many will agree is that he touched the lives of many in a myriad of ways. His melody as a musician and creative soul were interwoven in the patchwork of our lives. What is important for me is that I was able to tell him what a remarkable individual he was; how the love and respect I had for him as a friend and fellow musician would always remain in my heart.

I am honored to have had the experience of knowing Marlo. Of celebrating him as a friend and colleague, a true treasure for the soul. While he may be gone from us in the plane of the physical, his immortality reigns in the innumerable bodies of work where he gave of himself with his whole heart.

If legacy is wealth. He was the richest.

Some of many that Marlo worked with. 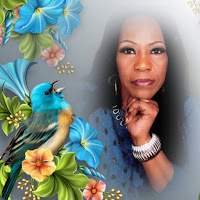 I met MarloHenderson around 2005 at KPFK Radio Station, Bobbee Zeno’s Blues Power show. Marlo had a strong kind sweet spirit with the mind of God. He was a Genius! His mind was like a computer… He was so optimistic, hopeful, positive, bright, cheerful, enthusiastic and confident. “That’s why he was so loved.” He had rhythm like an expert drummer, who knew how the beat should go. He had melody like the horn player he was. He played the guitar like no other! He’s the hit maker you never knew! Marlo Henderson treated me with compassion and understanding, he brought out the best in me, musically and spiritually! He was, my Producer, a husband, a father, a grandfather, a real FRIEND…I as many, was truly blessed, to have had this man touch our lives. He’s truly paid some, great musical dues in his life time! But as life itself, now he’s in God’s hands. The last time that I talked to Marlo, he was out and about with his wife Susan. He told me that he was feeling better that day, and “he would talk to me later.” I never got a chance to say good bye. The signs of the time is in everything! As simple as a short conversation… My heart is sadden but gladden at the same time, because his body was invaded with sickness, but now he’s flying over the rainbow. Talk to you later Marlo. “My Real True friend”… 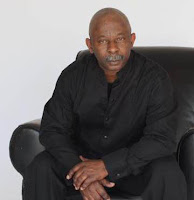 "Marlo Henderson was an incredible artist and friend. I always loved his humor, his stories with John Lennon and Paul MacCartney, Miles Davis and Jimi Hendrix. The early morning calls that would go on forever. I miss you my man!" 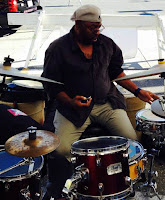 "Marlo and worked on many projects together I will miss his presence. RIP, brother." 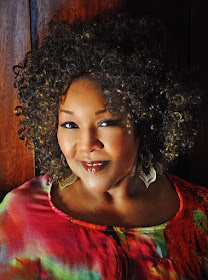 "... like a bolt of lightening out of blue, we lost a vital member of the Universal Musical Force. Marlo Henderson, Guitar Giant, has left the planet. To my shock and utter dismay, this news brings me to tears, as I reflect on the longstanding musical kinship we shared through many years. Through laughter & tears, hardships & victories, we remained true friends.

His musical genius graced and enhanced the productions of many well-known artists, who would become some of the most sought after performers in the world. Surely, there is a disturbance in the Force. His departure leaves a void that will remain. Marlo Henderson's place will not be duplicated. He was an original and one of a kind. He will be sorely missed. Soar on my "brother", we celebrate your time with us." 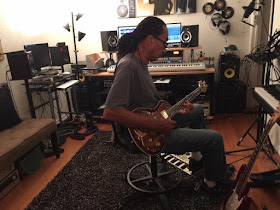 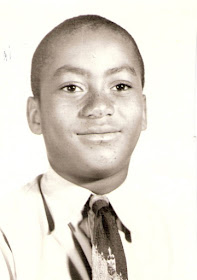 For all that you gave to the world of music. Truly an original and extraordinary individual.You are very present because of the body of work and the legacy of brilliance you leave to the world...Legacy is wealth.